Retire at Your Peril – Here’s the cake to prove it! – ‘A Work in Progress’ 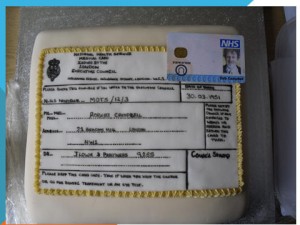 I formally retired on 16  July 2010, after working in the NHS since 1st August 1966. Then I had just left school and started work as a clerical officer at Staffordshire Executive Council, Brittania House, in the Registration Department.  I remember the Registrar liked reading the obituaries in the Stafford Newsletter and Stafford Advertiser so that he could remove patients from lists who had died. We spent our days writing medical cards and index cards affectionately known as NICs or NOMs for the two registers kept at that time. One was the Nominal Index Register, hence NICs  that had existed since 1911 and was a piece of history with references to then defunct Insurance Committees and Friendly Societies that have since sadly been destroyed. The other was the ‘panel’ – a list of small index cards recording the registration of a patient on a doctors list. What was interesting was that there were still people who were not employed in 1948 who missed out on being registered with a GP. These were people who were elderly. Another problem area was recording the deaths of those that died abroad. They remained registered for years after their death.  Nowadays all the records once kept on index cards and now on a computer, referred to as the National Spine..

On the Panel and On the Box

There was a curious phrase used in the 50’s and 60’s when I was growing up which was ‘on the box’. Another was ‘on the panel’. The panel was the index of cards representing the patients on a doctors list. Folks who were off sick prior to the NHS being introduced in 1948 were ‘on the box’ The box was where the Friendly Societies kept the money that was hand out to people off sick in the same way (perhaps not) as employees would receive SSP these days.

At the end of each quarter we, clerical officers, would physically count the cards in each doctors panel and wrap a rubber band around each fifty cards. Wow betide us if the count was wrong.  The figures were entered by hand in Ledgers which were then used to calculate the doctors payment by the Finance Department.  In addition to the index cards we also wrote a medical record folder and two continuation cards. One was an immunization card for babies and the other was a Summary Card. By the way in my first month at work I was paid £23.

One particular abiding memory of Britannia House was a problem with the drains. When one Friday after a visit to the local Grocutts fish and chip shop some kind soul decided to rid himself of his surplus newspaper wrapped chips down the gents loo on the second floor effectively blocking the drains and causing a most unpleasant flood on the first floor. I do not remember floor cleaning being in my job description but it was that day. 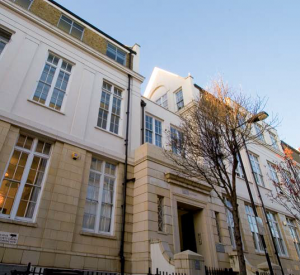 Insurance House at it is today

In 1971 I moved to live in a YMCA in Tottenham Road Couch End and work at the Inner London Executive Council at Insurance House, Insurance Street, Clerkenwell pictured above as it is today 46 years on. My job was in Department S12 marking up maps of the inner London Boroughs. I  travelled extensively around central London plotting the precise location of GP surgeries, health centres, dental practices, pharmacies and opticians, where it was not possible to work it out from Kelly’s Directory. It took around two years and as a result we were able to provide lists of surgeries in specific areas and to better help plan premises and surgery development in central London. I certainly became very familiar with the streets of central London. Well over 200 people were employed at the Inner London Executive Council. The Clerk to the Council was Len Willis and his deputy was Percy Knapp. There were 30 members of the Council and I remember being interviewed by them all. 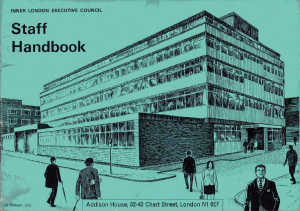 During my time at Inner London we moved offices lock, stock and barrel to Addison House, Chart Street within walking distance of Old Street tube station and Moorfields Eye Hospital. Thomas Addison discovered the degenerative disease given his name, caused by a deficiency in Vitamin B12. As the ‘map king’ I became responsible for planning the layout of the new building. It was my first experience of working flexi-time and of working in an open plan office spread over four floors. The day we moved I remember working for 36 hours non-stop. I soon moved on and became the Deputy Registrar at Hertfordshire Executive Council in 1974. By then I lived in a top floor bed sit near Holloway Prison and rode a Honda 50 motorbike to work.

The early 1970’s were the times when the IRA was active planting bombs wrapped in music score paper in London.  My unhappy recollection is dealing with such a bomb scare at Hertford House. Hertford as the staff evacuated the building by walking past the offending parcel. I was not popular for complaining about staff having to take a potentially dangerous route out of the building – To this day, I have never understood why! But then awareness of health and safety issues was not as sharp in the 1970’s as it is today.

Back to the Metropolis and a min-FPC

My next move nine months later was back to Addison House as a NHS reorganisation had split the Inner London Executive Council into five Family Practitioner Committees, one of which was Lambeth, Southwark and Lewisham. My Administrator at the time, John Gyves, was innovative in that he split the Administration Department into four Health Districts. I became a District Officer for the Kings Health District from 1974 until 1977.  I looked after the contracts of doctors, dentists, chemists and opticians for that Health district which became a wide ranging and very interesting job covering all aspects of FPC administration. I moved to live in Chatham, Kent not far from the park that overlooked the River Medway and was used in the title sequence of Softly, Softly.

On the move again in 1977 from a home in Chatham, Kent to a new home in Lichfield, Staffordshire. I started work at the Birmingham Family Practitioner Committee at Sutton New Road Erdington in 1977 and stayed until 1981. From my reasearch it appears that the purpose built concrete ‘hut’ for want of a better word no longer exists. My boss at the time was Kenneth Frederick Grace Day, a great grandson of the famous cricketer. He was a member of the Medical Practices Committee and as such travelled down to London every Wednesday.  The MPC was the body that decided whether a family doctor could set up his or her plate. The MPC no longer exists and the ability to plan general medical services is weaker in my opinion as a result. I was second in line in the Administration Department and spent most of my time handling complaints and dealing with Committee work.

My next move was to the Dudley Family Practitioner Committee from 1981 until 1987. The Minories was the home of the FPC and I spent a few years as Deputy Administrator. The Administrator was Alan Barker. We introduced an informal system of dealing with complaints as prior to this the formal complaints system involved Service Committees and was very formal as well as being very long-winded. My next move was a sideways move to the same job at Wakefield Family Practitioner Committee, West Yorkshire, where I spent a great deal of time planning and developing new surgery building projects, some 29 in all.

As a result of yet another NHS Reorganisation which saw the demise of FPCs and the development of FHSAs. I moved into general practice as a Practice Manager in a three doctor practice at the Upton Surgery, near Pontefract in 1991/1992, After that  I became Practice/Fundholding Manager at the Windmill Health Centre in Seacroft Leeds where I stayed until 1997The Practice has 10,000 patients and six GPs.  During this time I worked with the Leeds Fundholding Group and had an active involvement in the trade union, the Association of NHS Officers,  In 1997 I became the General Manager at the Leigh View Medical Practice and, Tingley, Wakefield  which was in the South Leeds PCG area. Eventually I retired in July 2010. In my final three years I spent most of my time managing a major extension of the surgery. Since then I have worked as a locum manager in a practice in Heckmondwike looking after a practice were the manager had died and then I worked in another practice in Cleckheaton for over a year.